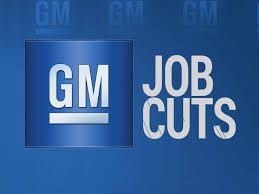 Hot off the presses yesterday was the news of General Motors 14,000 employee layoffs expected before the Christmas holiday. President Trump responded with an angry tweet threatening to cut off subsidies to GM in retribution for the redundancy while liberals on social media responded with “Muh… It’s Trump’s fault.”

While the retaliatory subsidy threat wasn’t warranted by the President, he is right on the mark when he says the subsidies must go. (Even when he is wrong, he is a right.) General Motors has been in decline for decades and we must let it fail.

It is not the job of the American tax payer to subsidize failing companies. If we wanted to keep General Motors in business, we would just buy their cars, but we don’t. Instead, drivers opt for the competitively priced, better quality Toyota and Honda brands.

Imagine if Starbucks sold garbage instant coffee rather than the premium brewed beverages we enjoy today. It probably would not be as successful. Now imagine that in order to keep Starbucks in business, rather than force them to make a better product, the US government mandated that every American purchase an over-priced instant latte every morning despite not wanting to drink it. Even a liberal wouldn’t agree to an arrangement that stupid, but that’s in essence how subsidies work.

Wrapped up in pretty bow addressed to “Too big to fail,” the Bush and Obama administrations agreed to subsidize GM’s declining business, to the tune of $50.2 billion dollars of tax payers’ money. Yet here we are, after another decade of poor performance, GM is struggling. The bottom line is General Motors is not offering quality products and no amount of assistance from tax payers will make that happen. It’s time for them to sink or swim.

Mainstream media and politicians of both parties go into an absolute hyperbolic frenzy at the mere mention of eliminating government intervention for deteriorating corporate businesses. They all assume that cutting off the government teat automatically equals bankruptcy but that isn’t always the case. Here are few examples:

Apple – It’s hard to believe that the tech giant that occupies nearly every American household was nearly never-to-be. In 1997, Apple was on the verge of bankruptcy until it was saved by a $150 million-dollar investment. That capital was not supplied by central planners but instead their own competitor, Microsoft.

Marvel Entertainment – Many young people today probably have no clue that their favorite super-heroes originate from comic books (or even what a comic book is), which was Marvel’s sole business before declaring bankruptcy in 1996. Once the bottom fell out, the company was forced to change its business model shifting from comic books to movies and merchandise.

IBM – The IT company has remained a reliable fixture in the American economy for over 100 years. In the 80s and early 90s IBM struggled as new tech companies swarmed the market driving up competition. In 1993, IBM posted an $8 billion loss, the largest corporate drop in US history at the time. After hiring a new CEO and laying off 60,000 employees, the company was able to regain its footing and is still a stock market favorite today.

One only need to look at these veterans of failure to learn that the mistakes of free enterprise can often be turned into giant successes. We are doing a disservice to the management and employees of General Motors by denying them the opportunity to turn into something even greater than before.

If General Motors can’t turn things around, employees will simply have to get new jobs, start their own businesses, or improve their skill set to compete in the market. These market forces have been working for 2000 years of commerce. They’re not going to suddenly fail now.

The values of the American free market enterprise are grit, determination, and risk taking. Let’s see if General Motors still has them.